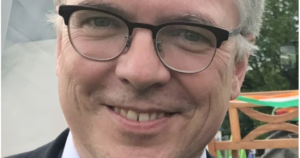 We were deeply saddened to learn that Ireland’s deputy ambassador to China, Michael Hurley, died on Sunday May 24th in Beijing following a short illness.

Michael served as Deputy Head of mission in the Netherlands from 2006 to 2011. He was a strong supporter of INBA and served on our Board for 4 years. During that time his warm friendly manner and good natured approach won him many friends in our association. We offer our deepest sympathy to Michael’s wife Anne-Marie, his children James, Niamh and Ciara and his entire family.”

As reported in The Irish Times, May 25th, the secretary general of the Department of Foreign Affairs and Trade, Niall Burgess, and the Irish Ambassador to China, Eoin O’Leary, said in a statement they were “deeply saddened to confirm the death” of Mr Hurley in the Chinese capital.

Leading the tributes to the career diplomat, Simon Coveney, the Tánaiste and Minister for Foreign Affairs and Trade, said “Michael Hurley was an exemplary representative of his country and a man who embodied all that is finest in Ireland’s diplomatic and public service.”

Diplomatic sources said his family and colleagues “were in absolute shock”.

It is understood that Mr Hurley (50), had an illness that worsened rapidly. His condition was not related to Covid-19, the sources said.

Mr Hurley was originally from Santry in Dublin and he joined the diplomatic service in 1988.

“The many of us in political life who worked with Michael in the course of his 32-year career saw at first-hand his extraordinary commitment and generosity of spirit, most especially in the vital work he was involved in at our embassy in Beijing throughout the current crisis,” Mr Coveney said.

Mr Hurley’s first posting was to the permanent representation to the EU in Brussels in 1998. Before he moved to Beijing he was deputy head of mission at the Irish embassy in Ottawa, and he also served as deputy ambassador in The Hague.

We use cookies to ensure that we give you the best experience on our website. If you continue to use this site we will assume that you are happy with it.OkPrivacy policy